A downloadable game for Windows and Linux

this is a little prototype I made over a holiday weekend in 2021. it's been a year and I haven't returned to do further work, so I think it's time to release this weird experiment to the community, despite its flaws. cheers!
- AC

/deckspace/ can be played almost entirely with the mouse. Right click on cards to flip them, and left click on them to play (or unplay) them--it's that simple!

When editing cards, you will need a keyboard to type. The enter key creates a new line.
To stop editing the card, left click anywhere on the screen. Note that you can still right click to flip the card being edited.

Tap escape to pull up the menu cards. From there, you can save your world to or load it from one of the three save slots, or quit the game.

You can optionally hold the tab key to make all cards equally bright (this disables the sentence preview highlighting).

There are six vertical columns of cards on the table, by default face-up, which you can collectively think of as a sort of 'dictionary'. From left to right: kinds, actions, links, traits, question cards, and outcomes.

There is one horizontal row of cards on the table along the bottom of the screen. This contains all the things you have made yourself. At the beginning of the game, there is only one thing: the nameless soul, which is... you! You might want to give yourself a name.

There is one deck of cards, face-down, at the top-right corner of the screen. This is your deck. It contains all the cards in the world that can possibly be provided as an answer to any creative or situational question you pose... so basically it contains nearly every card on the table! 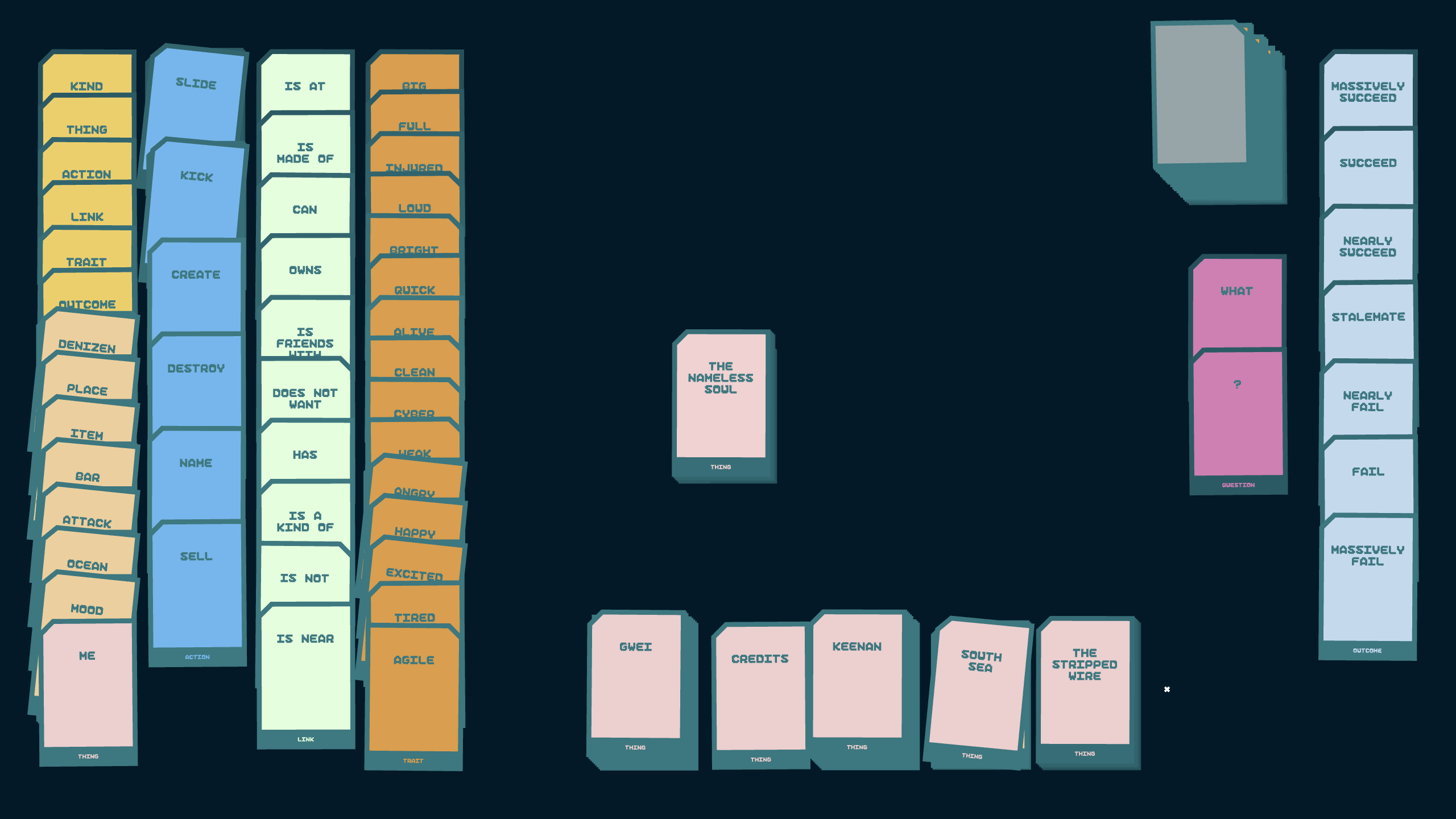 Left clicking on any card on the table (except for cards in the deck's discard or draw pile) will play that card, moving it to the 'in play' row in the center of the screen. At the start of the game, no cards are in play.

Left clicking on any card in play will unplay that card.

Once the chain of cards in play represent a valid sentence, all of them will pulse white, and a go! card will appear at the bottom of the screen. Left clicking on this card will 'speak' your sentence and resolve its effects.

The core game loop in /deckspace/ is creating new cards by asking the deck questions, which replies with cards you have already created--a repeating cycle of constrained creativity. Although the game does not restrict you from manually creating and modifying cards, /deckspace/ really shines when you use the deck as a creative partner in your worldbuilding.

To get you started with asking questions, you might want to try the following sentence:

When you play a card from the deck (as a response to a question), your sentence will automatically be reconfigured to accept the new card, and is guaranteed to be valid. You can then immediately speak this new sentence, or you can throw it all away and try again.

putting on a show

In order to do things in your world, you will want to create a custom action and describe what outcomes it can have, which might involve creating custom outcomes, if you so desire. Once you do this, you can have your various creatures and other things perform actions--and the deck will respond with the appropriate outcome in response.

Check out the section below for more details on building sentences, or just dive in and mess around if you want to experience the mystery without any more spoilers!

To create a new card, first play any thing: this is the speaker. Next, play create (the action), then play the kind of card you want to create (kind, thing, link, outcome, trait, and so on).

To rename (or christen) a card, play any thing, then play name, then play the card you want to rename. Note that you can rename any card in the game, including types (try renaming thing!).

Many cards can be linked to other cards. To do this, play a valid card, then a link, then another valid card. For example: the moon is made of cheese. Some links don't work in all situations.

Once you've linked two cards, the relationship is displayed as a stack, facedown, under the target card. Hovering over a card will display all of its relationships.

To apply a trait to a card, use the is link. For example: the nameless soul is alive.

Note that you can flip link cards with right mouse, which inverts their effect (for example, is made of becomes is not made of). This also works for several traits (e.g. big vs small). Note that you can create cards like this too: just flip the card you're editing and write on the other side.

In order to perform a custom action, you first must describe the outcomes that are possible when playing it. Several outcomes are provided by default. To define an outcome for an action, link it using can. For example: grapple can fail.

Once you've made a custom action and assigned outcomes to it, you can perform it by playing any thing, then playing the action, and then optionally playing any other thing you'd like to perform the action on. The deck will respond by shuffling and drawing an outcome for you.

You can put a ? after nearly every sentence to turn it into a yes or no question.

To make 'filter' questions, just put a thing between what and ? (for example: the nameless soul is at what place ?). This will filter your responses by the kind of card, which is useful for asking specific kinds of questions.

Filters are most powerful when combined with custom kinds. The most basic way to create a custom kind is with create kind. However, custom kinds cannot be used until they are linked with one of the core kinds (e.g. thing, action, or trait). You can do this with the is a kind of link. For example: attack is a kind of action, followed by wrestle is a kind of attack, which would enable you to ask questions like andre can do what attack ?

The most useful basic questions, I have found, are:

is not what trait ?

but of course, once you create your own links and traits, the space grows significantly (is friends with what creature, has what mood, etc.).

I haven't had time yet to make music for this prototype, but I highly recommend listening to some kind of ambient track! Here are some examples, if you're into that sort of thing (not my work): 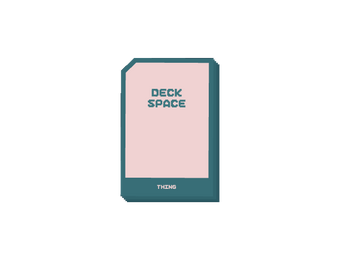